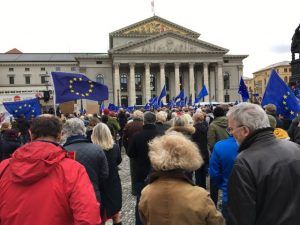 At the Pulse of Europe rally on Munich’s Max-Joseph-Platz, 19 March. Photograph: Christine Madden

MORE than a thousand people attended a Pulse of Europe rally in Munich on Sunday, 19 March,  joining thousands across Germany and other locations in Europe – including Galway, for which the crowd on Munich’s Max-Joseph-Platz gave a big cheer.

Waving flags and banners, the assembled crowd listened to speakers expounding on their personal experiences of Europe and the importance of the EU to them as private individuals, workers and professionals, community members and citizens. 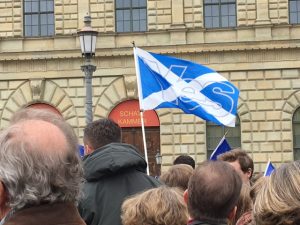 And although Britain and Scotland seem currently to be wrestling out their differences regarding union – EU and UK – membership, several of the attendees at today’s rally demonstrated their support for Scottish membership in the EU.

Pulse of Europe, a non-party-affiliated citizens’ initiative to defy the rise of far-right and racist politics in Europe, has begun holding rallies in German cities every Sunday. Their goal, according to the website, is “nothing less than the preservation of the confederation in order to secure peace and guarantee individual freedom, justice and legal security”. 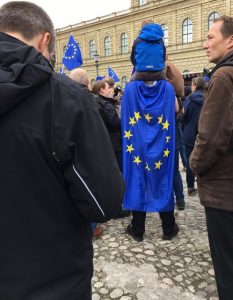 Father and son show their support for the EU. Photograph: Christine Madden

One hundred years ago, stated one speaker, European countries were at war with one another. Now, symbolised by the stars on the blue field in the EU flag, they are members of a political and economic union and – despite disagreements – at peace. The stability of the union and friendly understanding among these nations is a gift that should be valued and treasured and protected. 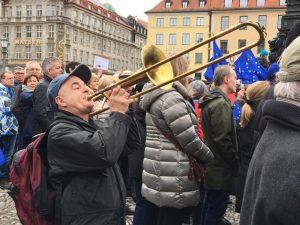 EU-enthusiast trumpets his support at the Pulse of Europe rally. Photograph: Christine Madden 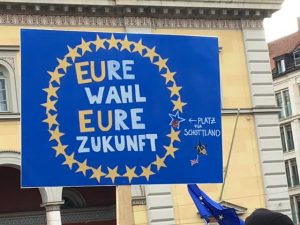