Stripping for Spencer, or making art in Munich 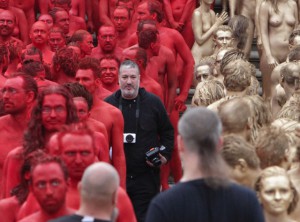 WHAT was I doing, standing shivering and stark naked – except for a shimmering layer of gold body paint – in the middle of Munich at 6am Saturday morning? No, it wasn’t the humiliating aftermath of a night on the tiles. The latest installation by photographic artist Spencer Tunick took place in front of Munich’s Nationaltheater – and I’m in there somewhere, trying to blend in. And, thanks to 1,699 fellow participants covered from head to toe in red and gold, I certainly did.

Photographer Tunick is known – or perhaps notorious – for his massive installations of nudes in urban and natural locations all over the world. Its potentially pervy element renders it an instant headline-grabber, but flaunters, voyeurs and anybody jiggling their relevant bits are categorically unwelcome – as the organisers make clear from the start. Not only to protect participants, but also because Tunick seeks “to continue the tradition of celebrating the nude and treat the true forms of real humans no differently than the classical, vitruvian ideal”, he explains.

The Bavarian State Opera commissioned Tunick to do a photographic installation inspired by their new production of Richard Wagner’s Ring cycle, directed by Andreas Kriegenburg. Including an event like this is an upgrade for the audience, says artistic director Nikolaus Bachler, because it calls on the Munich audience to take part.

Inviting the public to be performers as well as spectators is, Bachler adds, “not an uncomplicated logistical exercise”. This becomes obvious upon arrival at the installation’s meeting place at 3 in the morning on 23 June. From the end of the 500 metre queue of participants aged 18 to 80, you could see the floodlit Marstallplatz, where early arrivals had already assembled into the ad-hoc garrison to prepare. When you arrived, you got handed a small tub of body paint, red or gold, and directed into a compound according to colour. I got gold and shuffled forward to get a welcome cup of tea provided on the sidelines. Despite it being the beginning of summer, it was still only about 10 degrees, and I wasn’t much looking forward to peeling off my clothes.

But it could have been worse. A previous Tunick installation took place on the Aletsch Glacier in Switzerland, and in my crowd mingling, I came across someone who had taken part in it. What was that like? “Cold,” he says. But nudity was nothing new to him. As a naturist who often does things in the buff, he had once gone on a nude cycle through London with his mother-in-law. He showed me a picture. 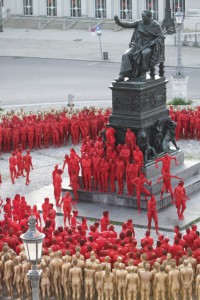 Then the games commenced. Tunick addressed the red group, telling them to “listen up” as they received precise instructions about how to apply their body paint and where they were going. He abruptly became fierce: no one who was intoxicated would be allowed to continue. He indicated into the crowd: “I’m serious!” he bellowed into his megaphone. “Das ist mein verdammter Ernst!” the translator roared into his. Several people were ejected.

As the encroaching dawn softened the darkness, the magic began. The opposite crowd suddenly went from a massive gathering of people to a throng of bare bodies squirming in the gloam. I blinked, and the opposite half of the square was filled with red devils, their teeth gleaming white, their eyes lurid, almost daemonic in the half-light. It was like being backstage at the theatre: you’re in a familiar world, and then you’re not, as if a wrapper had been peeled off the known universe and you’d entered an alternative reality.

On a signal from Tunick’s assistants, the red horde trooped, dancing and cheering, out of the square toward Odeonsplatz for the first photos. We yet-to-be-goldies applauded them on their way. A long wait, while the dawn whisked out the darkness, and then it was our turn.

We laughed and rubbed gold paint on one another

Again, the masses around me went from being an everyday crowd to a swarm of flesh rapidly disengaging from final bits of underwear. It was my turn. I stripped down to what god gave me, stirred my gold body paint with my finger and slapped a handful on my stomach.

The paint was cold and gloopy, but a heady sense of abandon filled the square. It felt like Glastonbury, like toddlers in crèche going wild with the finger paints. We laughed and joked and rubbed gold paint on one anothers’ backs. Within minutes, the square was filled with gold statues. It was like nothing else on earth.

Tunick had previously described these projects as “euphoric”, and the joy of taking part increased exponentially as the hours wore on. We weren’t just watching an event– we were the event. His work has inspired a wave of followers. A woman had come from Israel to take part, a message on Tunick’s Facebook page announced. His assistant Lauren Russell said there was an 80-year-old man who had been to all the installations, and had pictures of them at home on the walls. A shoot in Mexico City included 18,000 participants – and still they had to turn people away. “My recent installation in the Dead Sea of Israel is something I am particularly proud of,” Tunick confides. “Whoever thought there could be naked people en masse, making art in the Middle East?”

Streetcars passed, dinging their bells at us as we encircled the monument in front of the Nationaltheater. One driver stopped her streetcar in the middle of the track to take a picture with her smartphone; we cheered. Tunick yelled from atop a towering cherry picker, “There’s always a car! Get that car out of here!” and an assistant shooed a taxi away. The red mob joined us in ringing the statue and for a photo on the steps of the opera house. And then my gold paint paid off: I got to join a group of women for photos inside the Nationaltheater – on the marble staircase, and inside the sumptuous Königssaal. Something resembling a climbing frame at a playground had been set up in the middle, and we – gold statues with a pulse – draped ourselves around it to form a golden mountain.

The Bavarian State Opera will show a film of the making of the installation in July and exhibit the photographs in January, when they bring back the Ring for the Wagner bicentennial in 2013. Looking at these images that juxtapose the ordinary with the unexpected, the viewer gets jolted out of the sameness of everyday life. “Imagine the power of a live photographic image with thousands of real, human bodies,” says Tunick. The beauty and the buzz were well worth a few hours of braving the elements with your kit off.

Published in The Local on 25 June 2012: I stripped for Spencer: making art in Munich 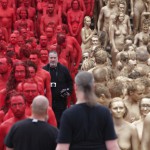 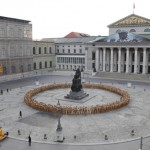 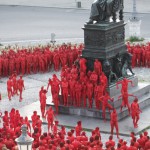 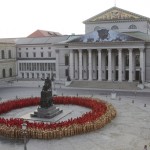