Brexit: ‘What can you live with?’ 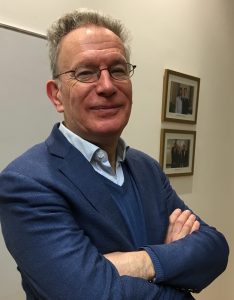 When the UK voted yes to Brexit, they forgot a minor detail. This minor detail – Ireland – will, as journalist and intellectual Fintan O’Toole explained, make negotiating any kind of Brexit at best an impossibility.

A long-time, award-winning columnist with the Irish Times, O’Toole presented a lecture at Munich’s Globe Business College on 19 January that approached the political phenomenon of Brexit from a historical and uniquely geographical viewpoint. Looking over from Ireland – a perilously close former colony of Great Britain, its closest neighbour across the Irish Sea – the prospect of Brexit appears absurd and dangerous to peace and stability – an own goal for a chimeric concept of Britishness.

The campaign for Brexit has been driven by a “visceral English nationalism”, O’Toole asserts. And it’s unusual, as the “English USP” is moderation and stability:

“They don’t do revolutions”. Their one revolution was “Glorious” because it was “bloodless”, and they didn’t have a socialist or fascist revolution in 20th century as so many of their European neighbours did. So this nationalism is poorly articulated, which made it much easier to grow without much attention.

One of the things a concept of nationalism needs is an oppressor, some kind of threat from outside, in order to engender fear, which in turn binds people together and strengthens its fabulous narrative. Because, as O’Toole states, “the basic problem of nationalism is that nations are ambiguous and fluid entities, a people held together by a common misconception of their origin”. A geographic unit of people that used to be the hub and chosen of an empire still retain an identity as an imperial power. Witness the “brilliant comedian and performance artist called Jacob Rees-Mogg” – a Eurosceptic conservative British member of parliament – who cites Agincourt, Crécy and Waterloo – all historical battlefields where the English won a resounding victory. But recalling old military successes from the Napoleonic wars of the 19th century – never mind the Hundred Years War of the 14th and 15th centuries – has embarrassingly little to do with the reality of the United Kingdom of the 21st century and its global position.

This “visceral” nationalism is naïve, claims O’Toole, especially as compared with the more tempered version across the Irish Sea. Irish nationalism is more “civilised” because “we’ve done the other bit” and have experienced the troubles – and the Troubles – it spawns. The importance of a realistic, inclusive vision of a nation is reflected in the Good Friday Agreement, achieved 20 years ago, in April 1998. The brilliance of the Good Friday Agreement,” explains O’Toole, “is not ‘what would you die for’ but ‘what could you live with?’”

Brexit has put everything that the Good Friday Agreement sought to allay back on the table. “What Northern Ireland really needed was 20 years of absolute boredom,” O’Toole says. Resting on EU law and regulation, the border between the Republic and Northern Ireland is an inner-EU border, which can be crossed without notice. And this intractable, insoluble issue has inserted itself into the centre of negotiations. There can’t be a hard border in Ireland. “The British establishment know it’s not doable, so they let [the issue] drift.”

“This is what I think is going to happen,” O’Toole explains. Brexit will go into the second phase of trade talks and they’ll realise that no deal can be made in the designated time. Instead, the negotiators will agree a temporary treaty to carry them further into a longer limbo. The UK can achieve a kind of unattainable dream of Brexit but with full regulatory alignment. “This leaves us with a fundamental question: is it worth it?” O’Toole asks. “I think not. Somebody has to stand up and say, ‘You know, self harm is not a national policy”.”