‘Doomed to be a writer’ 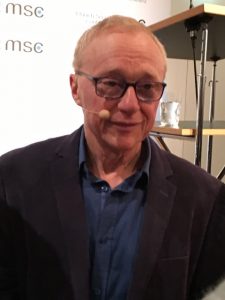 ‘WE CAN ALL IDENTIFY with the horrible experience of Cassandra,” says Israeli writer David Grossman at Munich’s Literaturhaus on 16 February. You come to feel that you’re in a dream, and it would be so easy for you to believe that you are the insane one. What, he asks, can literature do in such a chaotic world? “I’m afraid, very little.” He pauses, then continues: “Yet, quite a lot.”

This inaugural inclusion of literature in series of talks at the 2017 Munich Security Conference was suggested by Dr Jürgen Wertheimer, professor of contemporary German and international literature at the University of Tübingen. A welcome and prescient addition – particularly under the aegis of Cassandra, who didn’t fare particularly well as the harbinger of bad but accurate predictions in a world gone mad. In introducing the writers of this series – Grossman at the start, with Wole Soyinka and Hertha Müller to follow – Wertheimer contributes to the discussion with his broad knowledge of literature, quoting Ingeborg Bachmann – “Writing with my burnt hand about the nature of fire” – as well as Turkish prime minister Erdoğan – “Some books are more dangerous than bombs”. Grossman, like Soyinka, Müller and other wise voices in the dark, is “doomed to be a writer,” says Wertheimer, “doomed to truth and reality, doomed to observe something other than the mainstream”.

Grossman – who, as Wertheimer says, share’s Kafka’s fate of being recognised worldwide but shunned in his own country – spoke movingly of the current political chaos in the world today. He vividly exemplifies the image of writing about fire with a singed, even still smoking hand as a voice calling out in Israel for a two-state solution when the current political wind is blowing against him – fanning the flames. The Israeli-Palestinian dispute has gone on for so long that people are acting against their existential ideal, he reasons. “We are limiting our ability to free ourselves from the trap of the conflict.” Without the two-state solution, “Palestinians will never get sovereignty; Israelis will ruin with our own hands the miracle that created their country.”

‘Maybe we can write a new story for ourselves’

The tragedy of this perpetual conflict is rendered particularly poignant because of the “existential foreignness, existential homelessness” of the Jewish people. They had succeeded in creating one place in the world that will be a home for them. But, he says, “I don’t have such certainty that Israel will continue to exist. The feeling that you don’t have a future is a terrible thing for a society.”

Writing, however, including his own, can be a liberating influence. “Literature can connect us to a place inside us that recognises truth, what is light, what is darkness, the primal conditions of emotions.” In all his years of observing the often disheartening political process and corrosive conflict, he remains hopeful. “Maybe we don’t have to be stuck in this story,” he says. “Maybe we can write a new story for ourselves.”

Sadly there doesn’t seem to be any mention whatsoever of this outstanding programme on the MSC website. Maybe the hosts and participants agree with Erdoğan. Which is perhaps not a bad thing. Perhaps they, too, realise literature has an explosive power to wield. There’s hope for us all yet.