From Bierfest to mass protest: a week in Munich

There’s more than one way to experience the rock-concert vibe in Munich. The past week demonstrates, whether for party or protest, how young and old come together in Bavaria’s capital in the spirit of Gemütlichkeit 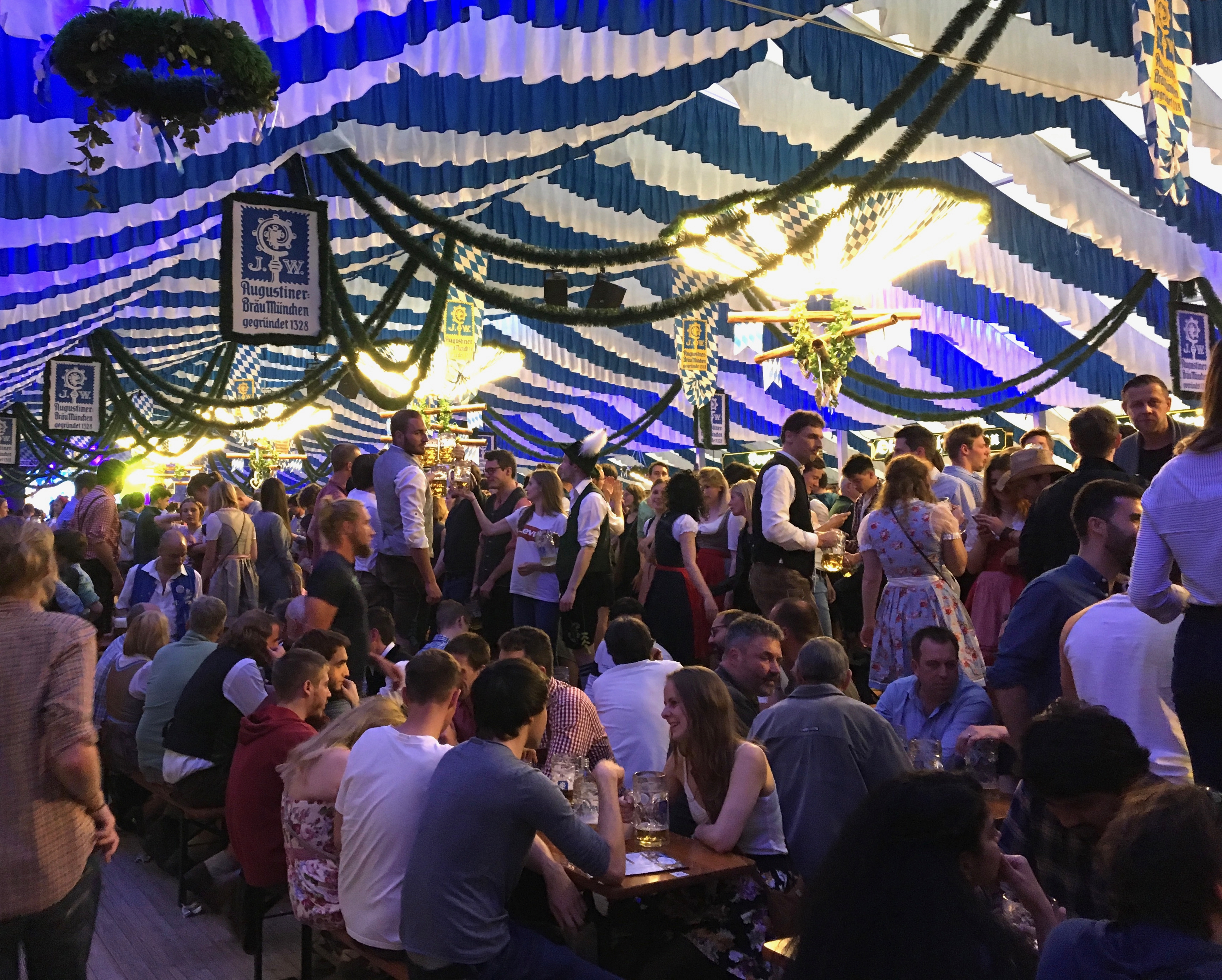 “Ein Prosit der Gemütlichkeit!” Thousands of young people are standing on beer table benches – when they’re not jumping up and down on them – bellowing the traditional Bavarian beer-drinking song along with the band. They’re at the Frühlingsfest, a kind of mini Oktoberfest in April and May on the same festival grounds. Even though their final year leaving exams are taking place during these weeks, having a stonkingly great time.

The phrase could be translated as “A toast to relaxed, good times”. Gemütlichkeit is a very hard word to render in German, and Bavarians have basically claimed it for their own. It carries the sense of cosiness and relaxed, jolly conviviality. Gemütlich, however, is exactly what it isn’t in the beer tent. This is more like a rock concert, the tent jammed to the rafters, the crowd shouting along to the band playing oldies from the 80s and 90s. The people dancing on the tables are drunk on beer and enthusiasm. Most of them are dressed in Lederhosen and Dirndls.

I’m sitting in a section on the side with a workplace group that booked its table in advance. It’s clearly not the cool place to be. At the adjacent table, a woman in traditional dress, who’s realised this and doesn’t like it, stands up by herself on the bench her comrades are sitting on and jumps up and down. By the time I leave, she’s got her boyfriend to join her.

I can’t hear myself think, let alone hold a conversation with anyone whose ear is further than two centimetres from my mouth, but that’s hardly the point. The atmosphere is electric and infectious – as the woman jumping and swaying dangerously on her bench next to me would concur. 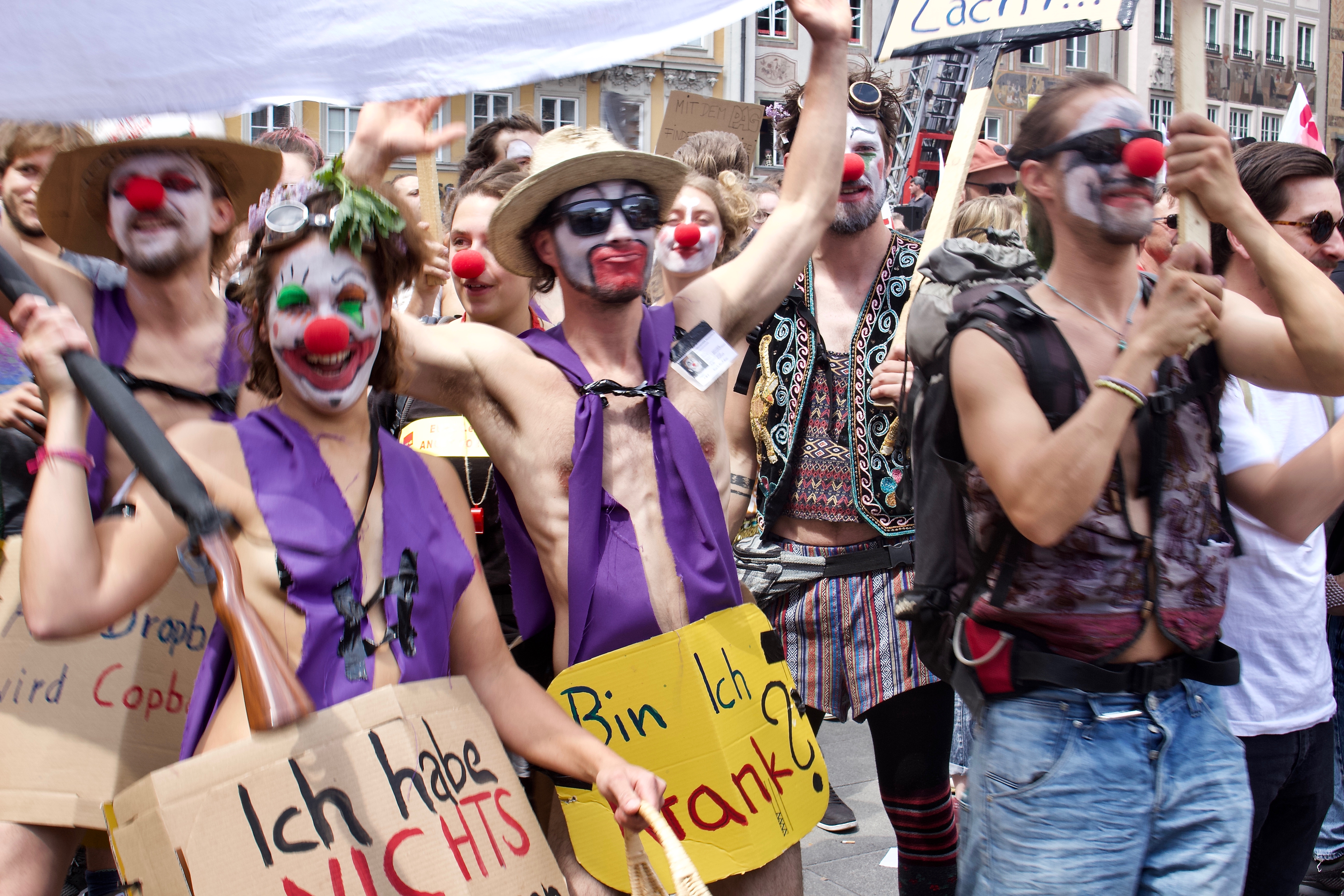 Revellers or rebels? Protesters with nothing to hide at the #noPAG demonstration in Munich. Photograph: Christine Madden

There’s a greater sense of Gemütlichkeit a week later at a very different gathering. On 10 May – Ascension Day, a bank holiday in Catholic Bavaria – a crowd assembles on the Marienplatz, the main town square in city centre Munich. They’re coming together for a demonstration to protest the new Polizeiaufgabengesetz (PAG), a policing regulations act that will give the Bavarian police force enlarged powers of surveillance, allow them to take action in “threatening danger” (as opposed to “explicit danger”) and theoretically make it possible to detain someone indefinitely without trial. The organisers of #noPAG are expecting 7,000 protesters. Up to 40,000 people turn up, carrying signs and banners, wearing T-shirts and stickers with anti-PAG slogans.

Like at a rock concert, the sense of belonging, of coming together for a common cause is strong, the camaraderie palpable. The Marienplatz is so full it’s impossible to manoeuvre through. The crowd swells into the side streets on all sides as far as the eye can see. When they start their planned one-kilometre march, there are so many more people than expected that the first people in the parade reach the end point at Odeonsplatz before the last stragglers on Marienplatz have even begun to move.

The governing party, the CSU, immediately criticised the demonstration and its organisers, the minister for the interior saying the protest was based Lügenpropaganda (mendacious propaganda, something that sounds a lot like “fake news”). The Bavarian minister president, despite sticking to his policy, strikes a more conciliatory tone, wanting to enter into dialogue with the PAG’s critics. The opposition, including the SPD, Green, Linke and other parties and organisations, continue adamantly to oppose the revised law. The government maintains the new law is necessary to ensure safety. The opposition asserts that it transgresses the federal constitution, encroaching on personal freedoms and privacy.

Bavaria will host state and local elections in October this year. The lines of opposition are sharpening. The one thing they all have in common: they believe in the Bavarian state and their ability to represent it. Their vision of how to uphold a peaceful, functioning and indeed gemütlichBavaria differ widely.