Memorial for victims of Munich shooting 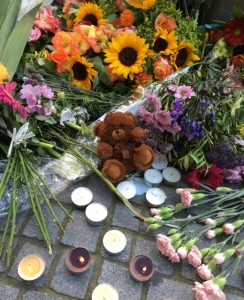 Flowers, candles and toys placed in memory of the victims of the shooting at Olympiaeinkaufszentrum in Munich. Photograph: Christine Madden

A design by artist Elke Härtel has been selected to commemorate the nine people who lost their lives at the hands of a lone gunman in front of Munich’s Olympiaeinkaufszentrum in July 2016. The memorial, featuring a living ginkgo tree, will stand opposite the site of the shooting in front of the OEZ shopping centre.

The attack, which took place after 6 pm on 22 July 2016, held the city of Munich in terrified thrall until the early hours of the morning, when the body of the 18-year-old perpetrator, Ali Sonboly, was found in a side street not far from the centre, where he had shot himself. Munich was in lockdown for the duration while police tried to hunt down the perpetrators of what had all the appearance of a terrorist attack. Instead, Sonboly was discovered to have been a loner who planned his attack using a weapon obtained on the dark net.

The tree will be planted in April in readiness for the official opening of the memorial on the one-year anniversary of the shooting. The design visualises the ginkgo encircled by a 2.5 metre-wide, stainless steel ring, partly sunk into the ground. Inside the ring, the names and images of the nine shooting victims will appear. The dual nature of the memorial combines symbols for solidarity, community and eternity (ring) with peace, friendship and hope (gingko). 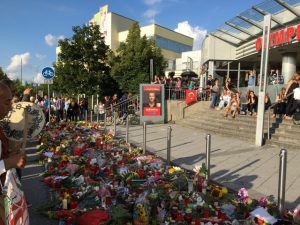 Thousands of people came to commemorate and mourn the victims of the shooting at Munich’s Olympiaeinkaufszentrum in July 2016. Photograph: Christine Madden