Homing in on the housing shortage 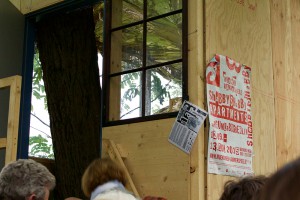 WE’VE all experienced the desperation of trying to find accommodation in a new city. When places are barely big enough to fit the amount of money you’d need to rent them , it’s time for a rethink. Especially if you’re an arriving theatre director looking for a channel to vent your flat-hunting frustration.

Not sure if the new artistic director of the Münchner Kammerspiele, Matthias Lilienthal, has dossed in any of them, but the pre-premiere piece of his first year at the theatre has sprung up across Munich like mushrooms – sometimes looking a bit like mushrooms as well. The project, Shabby Shabby , points a finger at the dismal – and worsening – housing situation in many trendy cities.

The idea isn’t entirely original – Lilienthal presented it before at the Theater der Welt festival in Mannheim – but it feels pertinent and pressing in Munich, a wealthy city with a dire housing problem. Looking for accommodation here is like attending a casting call on Broadway, and a friend of mine swears she’s seen money quietly changing hands between desperate, hopeful tenants and a smug estate agents.

After receiving more than 250 designs from all over the world, the MK chose 23 to develop. The projects were built at various locations around the inner city, and people can book a night in any of them – with the unfortunate exception of one, called Yellow Submarine, that burned down, quite likely due to arson. As a result, they’ve stepped up security, and the remaining dwellings can be rented out until 13 October. If you’ve ever attempted to book a bed in Munich during the Oktoberfest, you’ll appreciate how useful extra shelter can be.

I took a tour of the Shabby Shabby apartments last weekend. Some were clearly cosier than others, but apart from being sturdy enough to spend the night in, they took camping to a new level, a bit like being able to bed down in a cross between a museum installation and a Druid dolmen.

The structures are only temporary – they need to be dismantled and taken down after the 13th. Do they highlight the need for more – and more affordable – housing in Munich? Do they project a sense of what it’s like to have to huddle in a doorway or under a bridge for warmth and shelter? The recent arrival of thousands of refugees amplifies the significance of having to sleep in makeshift – and torchable – accommodation. But most Shabby Shabby punters can go back to their cosy homes the next evening. Hopefully with a heightened awareness of how lucky it is to have a secure roof over your head, and how vital it is to find ways to provide the same for less fortunate members of society.

Best thing about it  Reliving that tickle of excitement from childhood when you got to spend the night in a treehouse in your best mate’s back garden
Worst thing about it  Obviously, the name – another example of English used in a German context to sound cool, and achieving the opposite. 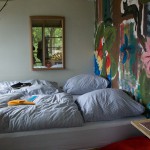 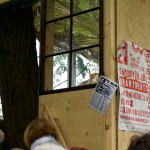 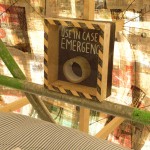 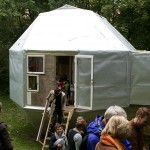 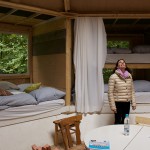