The children they wished to forget

The Irish theatre company BrokenTalkers presents The Blue Boy, a stark depiction of a dark episode of Irish history 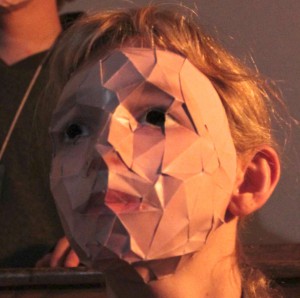 Image from The Blue Boy by Broken Talkers

THERE’S a ghost that haunts Artane, a part of Dublin where Ireland’s largest industrial school used to be. Schoolchildren there tell stories about “the blue boy”, who once came to a bad end at the school.

Sadly, he wasn’t the only child who suffered there – and not the only one who died. The survivors carried away the baggage of their past – the physical and psychological injuries it inflicted – when they were finally able to put the school walls behind them. BrokenTalkers’ The Blue Boy tells their stories in a production combining text, sound, images and physical performance.

Gary Keegan, co-artistic director of BrokenTalkers – together with director Feidlim Cannon – has a particular interest in this story. His grandfather, an undertaker, had been called into the school on several occasions to measure the body of a child who had died for his coffin. Sometimes, Keegan’s mother told him, he noticed bruises on the child’s body.

The Ryan Report confirmed the abuse of countless children

When it was published in Ireland in 2009, the Ryan Report confirmed this story – and many others besides. Eleven years in the making, this report encompassed thousands of pages and confirmed the abuse of countless young children who, as social undesirables, were brought to these industrial schools and reformatories – which were the care and responsibility of the Catholic Church. This shed a particularly glaring light on the children’s suffering, rendering their torturers not only sadistic, but also hypocritical.

Keegan and Cannon decided to make this the focus of a theatre piece. They not only read the Ryan Report but also interviewed dozens of former students of these schools. They were so shocked by what they heard it sometimes moved them to tears.

“I conducted the first interview myself,” Keegan remembers. A former industrial school student had recounted, 30 years later, that she and her fellow inmates had the job of making rosary beads. “She talks about being so hungry that she would eat the beads just to stave off the hunger. She said it in such a matter-of-fact way. It completely tore me apart. So we had to edit that interview because you can hear me in it getting upset.”

She ate rosary beads to stave off the hunger

Keegan and Cannon combined this and other stories – including Keegan’s own – with physical theatre into a unique production. Sombre images from the last century form the backdrop for masked performers to illustrate the children’s misery and desperation. Wearing masks fractured into cubistic impressions of faces, they demonstrate the broken lives and souls of the children and indicate how their humanity was taken from them. “So much of what they had to do was work related,” says Keegan. “The environment was dehumanising. They all had a number as opposed to a name. They had to do a lot of marching. And when they weren’t marching or working, they were probably beaten.” The choreography and physicality of the work reflect this.

Keegan denies, however, the occasional parallel drawn between the schools and the concentration camps of the Third Reich. “This is something that happened in Ireland in a different context: a context of abuse of care and trust, and collusion between the State and the Church. The Irish context is something we’re very keen for people to understand, the relationship between the Church and the State. The State were complicit in what happened. And they paid for it as well.”

When the Ryan Report was published, there was a huge outcry in Ireland. People were not only horrified by the abuse but also by the incredible extent of it, and that it took place under the auspices of the Catholic Church with the knowledge and complicity of the State. The shame was overwhelming. Creating a piece about the situation that dealt with its horrors was no easy task. “Sometimes,” Keegan reveals, “as a joke in our e-mails, we’d put in the subject line to our colleagues who were part of the crew, ‘The show that Failte Ireland doesn’t want you to see’.”

Keegan is nevertheless proud to be able to show the piece to an expanding and now international audience. The show had its German premiere at the New Plays from Europe festival in Wiesbaden, and in a few days will be presented at the Stuttgarter Europa Theater Treffen. Next year the piece will go to the Festival de Liège in Belgium, with hopefully a few more performances in Germany. “I think, and Feidlim might agree, I’m not necessarily proud that this is an Irish story, but I’m proud of the way we’re presenting it,” explains Keegan. “We’re representing Irish culture and theatre well by choosing to present this story in this way. It’s sending a message to whoever sees or experiences it that Ireland is a creative place.”

The production wouldn’t have been possible 20 years ago, Keegan believes. Today, “citizens are beginning to stand up more for truth”. And this is something else he’s proud of. “The story isn’t necessarily a positive one,” he admits,” but it leaves you with a sense there’s an opportunity to make things better, it’s not all lost. I think the show ends on a hopeful note.”

Perhaps then even the Blue Boy can rest in peace.