It’s not every day you get to watch a giant vulva reveal itself on stage to the lilting tones of Ave Maria sung sean-nós. It was a tonic after a week of running after film clips, dodging the raindrops and asking for views on Berlin’s sparkling new International Women’s Day bank holiday. And where else but Berlin would you get it?

Apart from all the demonstrations, strikes, information days, breakfasts, there were evening parties and club events. This one, however, put together by Nina Hynes and Dee Mulrooney, two of the initiators and organisers of last year’s Craw Festival, nested itself in the intimate back room of the Wein-Salon in Berlin-Friedrichshain. Nina Hynes performed on a variety of instruments and sometimes belted, sometimes whispered out her own tunes about womanhood. For one song, she split the audience down the middle – the fault line cleaved between my husband and me – with one side panting out a rhythmic high E, the other chanting out a low “vul-va, vul-va, vul-va”. For those without a “vul-va”, Hynes suggested, they could share one with someone else – but only by invitation.

Then she switched styles to the reverential, crooning Ave Maria – the cue for the Growler, aka Deirdre Mulrooney, who shed her Tizian-blue mantle to expose herself in wavy layers of red, complete with a nub of a pink cap. Her performance combined singing and stand-up, infused with a kind of native, feral spirituality. It had us in stitches – until she sang about the babies of Tuam.

Alongside the small stage – about the size of a Eur-palette – stood a candleholder, the accumulation of wax on it reminiscent of a cave encrusterd with stalagmites. In between there was an altar of sorts, decorated with votives of both the Virgin Mary and an embroidered vulva. In appearance they resembled each other to a surprising degree. But I’m sure Mary would have approved. She, too, had a vulva. Nobody really knows how Jesus got in there in the first place, but he almost certainly came out the usual way.

Thank God – or Mary – that you can still find venues and fringe acts like this in the middle of Berlin. In a world in which gentrification is closing down small neighbourhood venues, city-centre Berlin still has corners and back streets where you can stumble on to places like the Wein Salon. Or be initiated into by a friend. Irish artists have leapt into this haven and forged their place in it. The atmosphere is something like Greenwich Village ca. 1961 (I imagine in my fantasies, sadly not having been there to experience it). No better way to conclude Berlin’s first International Women’s Day holiday. 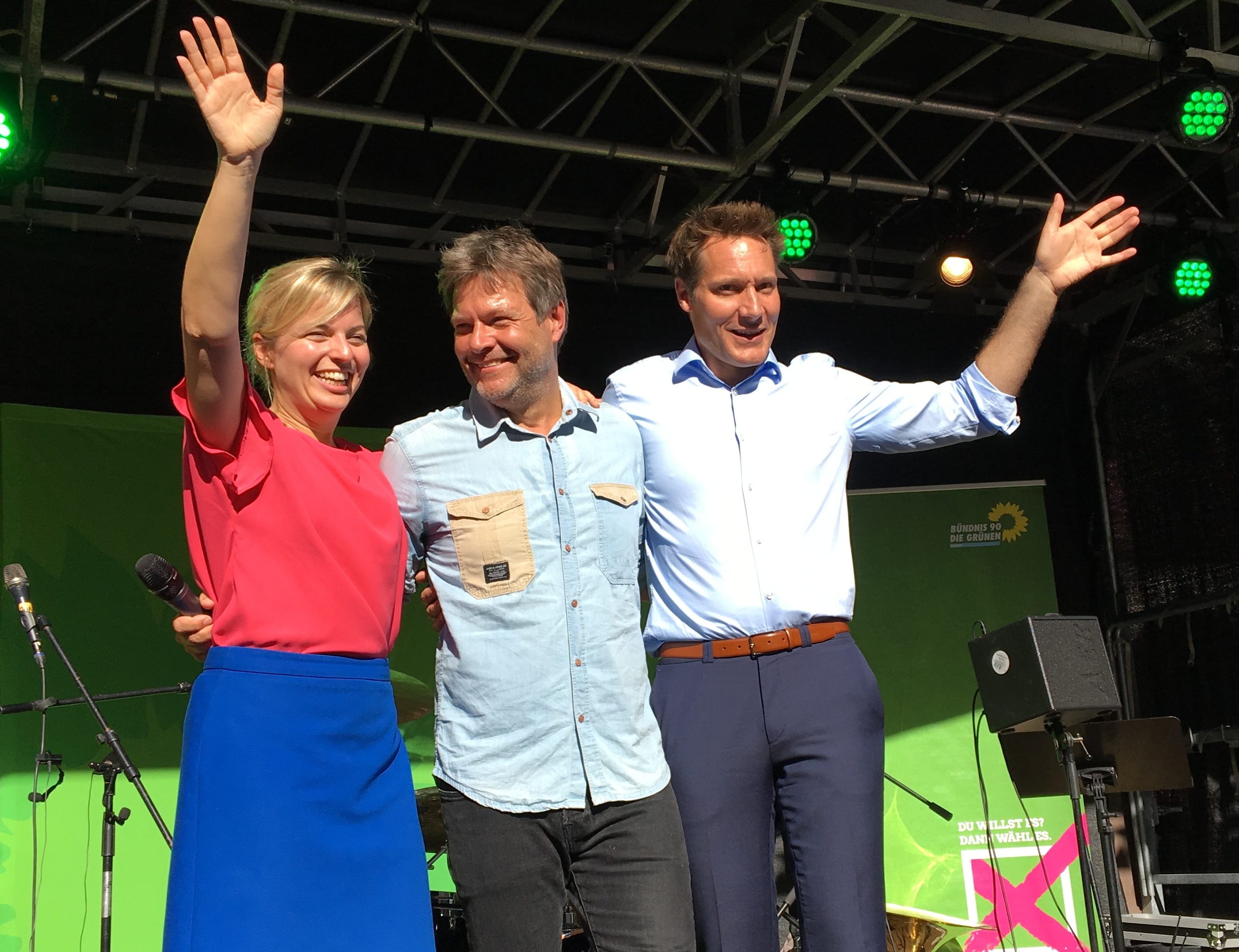 “Threat of danger” – to democracy

On 15 May, the Bavarian parliament will vote on – and most likely pass – a controversial law giving the Bavarian police enhanced powers, despite vociferous opposition

More than 30,000 people assembled on 10 May to protest against the revised Polizeiaufgabengesetz, (Policing Regulations Act). The unexpectedly enormous surge of nay-sayers indicates the fear and anger regarding a law that will give the Bavarian police force unprecedented power to conduct surveillance and detain individuals – some say, to levels not experienced since the Nazi regime.

The great complexity of the new legislation does little to allay concerns. The act under discussion is not a new law but an amendment of an old one. Every state in the Federal Republic of Germany has its own police force and its own policing regulations. In Bavaria this is called the Polizeiaufgabengesetz(PAG). It was initially enacted in 1955 and is regularly amended as required.

Recent rulings by the Bundesverfassungsgericht(Federal Constitutional Court) regarding data protection and the responsibilities of the Bundeskriminalamt(BKA) the Federal Criminal Police Office, have made it necessary for all German states to update their policing laws. In response, the Bavarian government already updated its PAG in 2017; it went through without much uproar in a national election year, apart from strong objection from the Green party, which voted against the amendment.

In response to the constitutional ruling, the new PAG is designed to enhance data protection. An independent body will in future be entrusted with determining whether Internet surveillance may be undertaken. But other unrelated measures are also included in the law. For example, the changes giving the Bavarian police increased powers of investigation go beyond the area of terrorism prevention, the original scope of the BKA judgment.

One of the biggest issues with the new PAG is the concept of “drohende Gefahr” – imminent/threat of danger – a term taken from the BKA ruling. The proposed change will give the Bavarian police the power to take action when a threat of danger is perceived, not only when there is a real and present danger is identified (konkrete Gefahr). This would mean the police could take preventative measures based on assumptions derived from collected evidence. Methods of collection include phone tapping, secret investigations and online surveillance.

Some enhanced powers to gather this evidence are also a feature of this law – for example, the extended use of DNA evidence. Up to now, police were only able to use the DNA harvested from a crime scene in order to compare it with that of the alleged perpetrator or witnesses. Under the terms of the new PAG, they would be able to use samples to build a DNA profile of the suspect, including hair and eye colour and – controversially – area of origin.

Sign at the #noPAG demonstration at Marienplatz. Photograph: Christine Madden

The police would also be able to seize letters and parcels, and assess them. This measure is designed to prevent the delivery of drugs and weapons obtained on the darknet. The suitability of all these measures would have to be determined by a judge before implementation.

Additionally, the bodycams that many Bavarian police already wear would be set to film continually, rather than be switched on manually by the individual officer. Instead of pushing a button to turn the camera on, the button would be used to record the footage permanently. Otherwise, the film recordings made by the camera would be overwritten.

Another feature of the PAG is the ability theoretically to detain someone indefinitely without trial. Before the previous incarnation of PAG in 2017, a suspect could be put in preventative detention for only 14 days. Under the new law, suspects can be jailed for up to three months, after which a judge can determine whether to extend the detention period for another three-month period. A suspect may therefore be locked up until a judge decides otherwise – there is no limit placed on the detention period.

Critics of the PAG declare that these elements infringe on individual and personal rights and are unconstitutional. The concept of “drohende Gefahr”, for example, is too vague, they argue. A more precise definition should be necessary before the police may interfere with the rights accorded to the individual under law. They point out that the German constitutional court used the concept of “drohende Gefahr” in the context of terrorism prevention – but the PAG extends it more broadly into other areas of criminality, such as stalking. The spectre of cyber-surveillance, bodycams, electronic tagging, face recognition CCTV and extended dragnet Internet searching has also alarmed people – many of whom swelled the ranks of the demonstrations in Bavaria, particularly the one in Munich.

“I’ve no interest in this law,” said protester Fritz Bommas, a student from Augsburg. “We don’t want any more security measures.” Another student who did not wish to be named said: “It’s an invasion into our basic rights. We’re here to show the CSU that there are lots of people who don’t want this law.”

An architect and a doctor based in Munich, when asked if they could be named, reacted with both anxiety and annoyance. “Ten years ago, I wouldn’t have hesitated,” said the architect. “Germany has a federal security police force. Why does the Bavarian police need extra powers?” 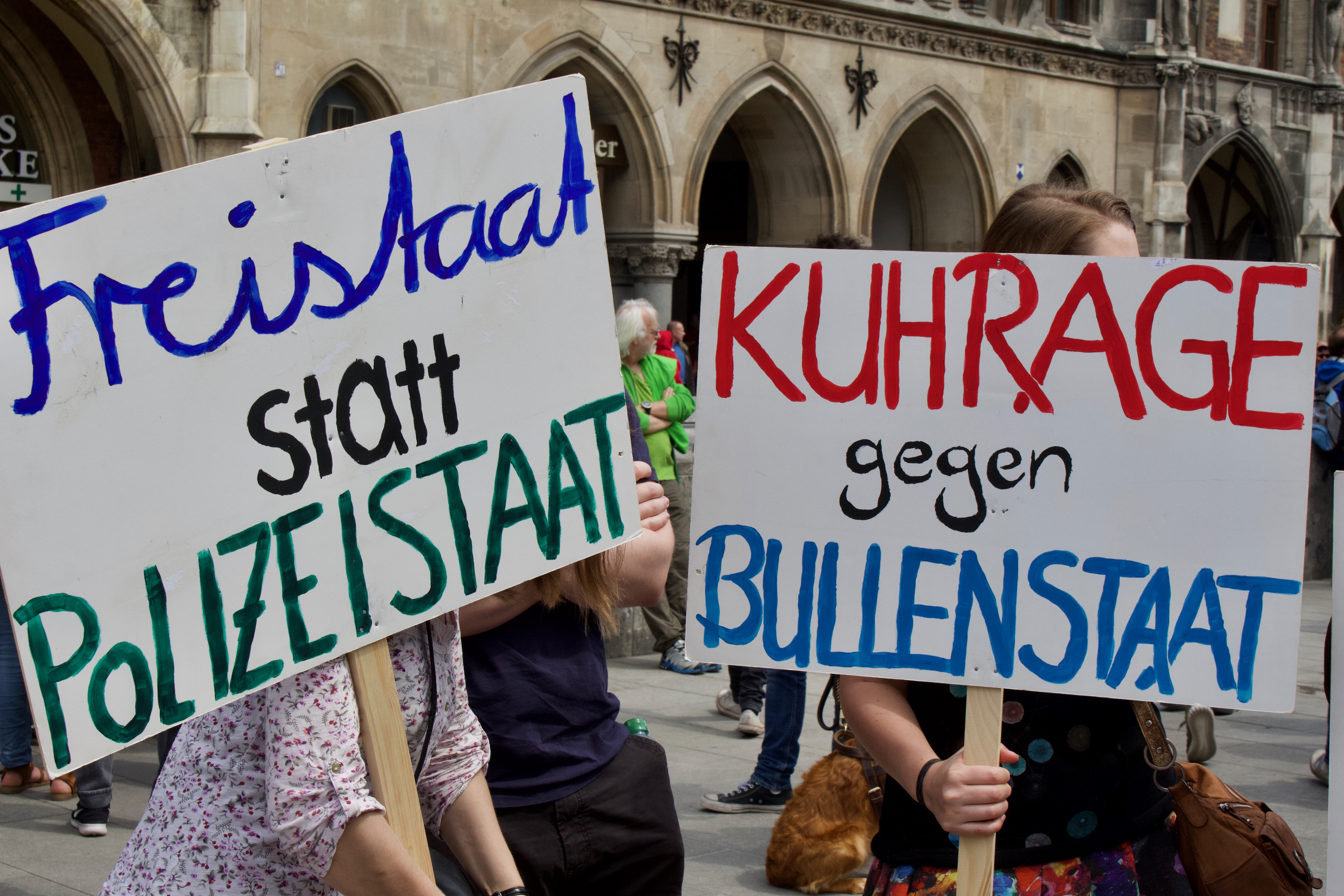 The Bavarian minister of the interior, Joachim Herrmann, criticised the demonstration the following day, stating that the protesters had been misled by “Lügenpropaganda”. This drew an immediate, furious response from Natascha Kohnen, leader of the Bavarian SPD party, who was among those at the Munich demonstration: “Anyone who describes more than 40,000 demonstrators who have taken to the streets for their right to liberty as ignorant and misled by propaganda shouldn’t be minister of the interior.”

At a weekend conference of the CSU, the reigning party in the Bavarian parliament, Bavarian minister of state Markus Söder struck a conciliatory tone. “The whole aim is to avoid victims of crime,” he states. “We’re taking concerns seriously.” Insisting that the law will go through as written, he nevertheless expressed a desire to broaden dialogue. He announced plans to create a committee composed of data protection and constitutional law experts and former police practitioners, possibly also citizen representatives, to observe and report on the way the law is practised in the next three to four months.

The chairperson of the Greens in the Bavarian parliament, Katharina Schulze, described this measure as a sop. “To establish a dialogue process and a committee after a law is passed is a transparent manoeuvre,” she criticised. “But it won’t stop the protest!”

The CSU is determined to push the PAG through and – as they have a majority in the Bavarian parliament, no one seriously doubts that it won’t be passed. But apart from introducing controversial changes to the powers of the police force, the PAG is politically crucial to the CSU. Bavaria will hold its state and local elections in October this year, and all parties have a vital stake in the future of this policing regulations act. The CSU is under pressure to re-establish its mandate and strength in Bavaria after last year’s sobering loss of voters to the far-right party Alternativ für Deutschland.

Newly minted federal Minister of the Interior Horst Seehofer, the former Bavarian prime minister, sees the law as a prototype for other federal states. But the PAG can only serve as a basis for discussion. It will, however, increase the political pressure on other states to ramp up the security measures made available to the police.

A group of 21 students at universities in Munich, Würzburg and Erlangen, together with professors, have put forward a legal objection as part of a group project. “This law is a danger to our constitutional democracy,” Tim Schilderoth, one of the students, told the Süddeutsche Zeitung’s magazine jetzt: “Personally, I would rather live in a democracy in which the police trust the citizens. A state in which the relationship between police and citizens is influenced by extreme mistrust and heavy powers of intervention is not, to my mind, something to aspire to.”